Start a Wiki
Wrathia's Heart Key is collateral given to Ava Ire. It was created from Wrathia Bellarmina's heart, when Ava asked for a piece of her soul in order to ensure that the pact would be completed. Wrathia gave Ava her heart because it is the piece of her soul that she claims she no longer uses. The key first makes an appearance on page 0295.

The base of the key is in the shape of a heart and resembles Wrathia with gems for eyes.

Besides being able to open and lock the Drawer of Wrath. The key ensures that after Wrathia's half of the pact is complete, she cannot separate from Ava until she properly fulfills her side of the pact; giving Ava a new, completely different life. A failure to complete the pact would cause their merged souls to become a "monster of failure".

The key has the power to turn into a battle axe form. In this form, the key grows several feet in length, and is summoned when Ava pulls it out of her chest drawer after drinking the red vial.

As per Ava's request, Wratha gives a piece of her soul to Ava in the form of a key. Ava wakes up after taking Wrathia's heart key as collateral. Ava then notices the key sticking out of the wrappings on her chest. Upon removing the bandages, she sees a drawer embedded into her chest with the key in a keyhole. Inside the drawer is a book, Wrathia's Plan, filled with "bad drawings," as Ava Ire describes them. Later Odin, who notices the key and lock on her chest and remarks that it must be painful. He picks her up and she angrily tells her to release her, calling herself a "dangerous alien." After incapacitating Strategos Six, Ava says that she will show her appreciation of TITAN through a theatrical production of her own design; Ava then throws Six off the stage and pulls a battle-axe resembling her key out of her drawer. Ava starts to move on to the next 'scene'; while lifting her axe, Ava tells the audience members that are still alive to do her a favor and scream. Ava swings her axe and causes an explosion, killing everyone in the main stage area and damaging the surrounding rooms. 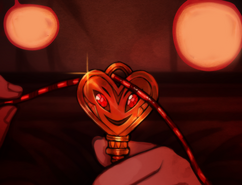 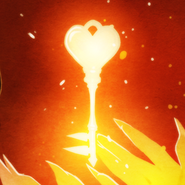 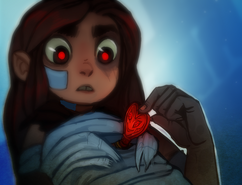 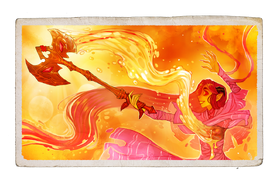 The key, turned battleaxe.
Add a photo to this gallery

Retrieved from "https://avas-demon.fandom.com/wiki/Wrathia%27s_Key?oldid=14718"
Community content is available under CC-BY-SA unless otherwise noted.