Start a Wiki
The Vengess are a humanoid alien species which evolved from dinosaurs. The Vengess were ruled by Wrathia Bellarmina and Pedri Nanezgani, but one-day TITAN invaded Wrathia's Home Planet and conquered the planet, their actual fate is unknown, but they are possibly at the point of extinction or being ruled by TITAN and the Followers.

It is unknown if Vengess are born with their horns already protruding or if they become visible in adolescence. As Nevy Nervines begins to retrieve her memories it is shown that Wrathia has much smaller horns as a child and as she grows older the become larger so it is safe to assume this applies to all Vengess. they have sharp teeth with for some angles out so that they are constantly visible along with pointed ears. Their skin varies from shades of yellow, orange, and red all giving the effect of appearing like lava which changes with the individual's emotions.

It is assumed that the makes may have three eyes instead of two like the female with Pedri and Wrathias former husband being examples. It is also assumed that Pedri is an abnormality among his people as he has purple skin and hair along with four fingers instead of five.

The Vengess are capable of magic, as seen in the potions Wrathia brews, and Pedri's ability to conjure dragonflies.

The Vengess race was assumedly ruled by Wrathia Bellarmina on her home planet until TITAN challenged Wrathia. It is unknown what became of the planet and her people after her death. 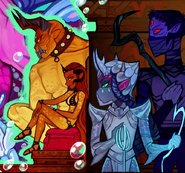 Add a photo to this gallery
Retrieved from "https://avas-demon.fandom.com/wiki/Vengess?oldid=14752"
Community content is available under CC-BY-SA unless otherwise noted.