Ava Ire's chest drawer appears to be made of wood with the designed being what is presumably Wrathia's smiling face and flames, with the keyhole being her nose.

Ava's drawer serves as a means of transporting objects between Ava's Mind, where Wrathia resides, and the physical world. The Drawer of Wrath initially provides Ava with Wrathia's Plan, the Vials, the Limbo Lenses and the Chattermina telephone.

As per Ava's request, she gives a piece of her soul to Ava in the form of a key, creating the Draw of wrath. Upon waking up and removing the bandages, she sees the drawer embedded into her chest with the key in a keyhole. Inside the drawer is a book, Wrathia's Plan, filled with "bad drawings," as Ava describes them. Ava Ire cannot understand the symbols and becomes exasperated. Wrathia then calls her on a small phone that appears in Ava Ire's chest drawer. Later Odin, who notices the key and lock on her chest remarks that it must be painful. He picks her up and she angrily tells her to release her, calling herself a "dangerous alien." Odin then hangs her on a tree branch and tries to take a picture of the drawer, but Ava kicks his camera out of his hands, and brakes the branch in the process.

Odin removes the branch from her dress and gives her his coat to cover the drawer in her chest, Ava sees this as a friendly gesture and stays. After incapacitating Strategos Six, Ava says that she will show her appreciation of TITAN through a theatrical production of her own design; Ava then throws Six off the stage and pulls a battle-axe resembling her key out of her drawer resembling lava. Once pulling out the battle-axe the drawer returns back to normal. After trying to justify and explain the reason behind her actions to Gil, Ava rips the front of her dress revealing the drawer. She unlocks it pulling out Wrathia's Plan explaining the basics of being a host to a demon. once Gil becomes possessed by Nevy and Ava pulls out the Limbo Lenses.

After Ava explaining to Odin what a Pact is he asks if that has anything to do with the drawer on her chest. She says that it is and that she believes Wrathia put it there to both cover Ava's injury and to spite her. Odin then asks what it is exactly. Ava then goes on to explain that its a specific drawer that only she and Maggie know about. Though it's not the same as the "snack drawer" seeing as this is a portal connected to Ava's mind, and Wrathia is able to place thing in said drawer. Once Ava tells Odin the pact she must complete she becomes frustrated and to scratch at the drawer as it is beginning to give her splinters. Odin suggests just taking it out and begins to shimmy it out. Once out it appears to look like space is simply full of stars. Ava is unable to put her hand into the blank space acting as some form of window to her, though Odin is able to stick his hand in only for it to appear in Ava's mindscape with Wrathia similar to Nevys. 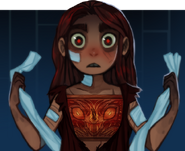 Add a photo to this gallery

Retrieved from "https://avas-demon.fandom.com/wiki/Drawer_of_Wrath?oldid=14578"
Community content is available under CC-BY-SA unless otherwise noted.