The Arrow family is a powerful clan that have a database of information about the universe and access to some of the advanced technology that exists in the Ava's Demon Universe. The family has a strict hierarchy that needs to be followed by the members. While they don't support TITAN, they do not show any open hostility to the followers.

The origins of the Arrow family are unknown. It isn't clear if they follow a bloodline or if they work as a mafia, allowing members from other blood families to join the clan. The family existed since, at least, the fall of Pedri and Wrathia's Empire, refusing to bow down to TITAN after the followers took over the universe. The family lives on a hidden planet not yet under TITAN control. It is also known that the Arrows hold a royal ancestry as well as the current family members posses noble titles.

The Arrow family appears to be an unknown entity to most people, despite refusing to follow TITAN. They aren't seen allying with other groups and other groups aren't seen talking about them, showing their independence.

Some members of the Arrow family are yet to make physical appearances. However, these are the members revealed/alluded to: 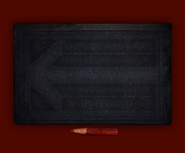 Add a photo to this gallery
Retrieved from "https://avas-demon.fandom.com/wiki/Arrow_family?oldid=13401"
Community content is available under CC-BY-SA unless otherwise noted.